Big David. Tiny Car. - Why this Triumph Spitfire is a race car. 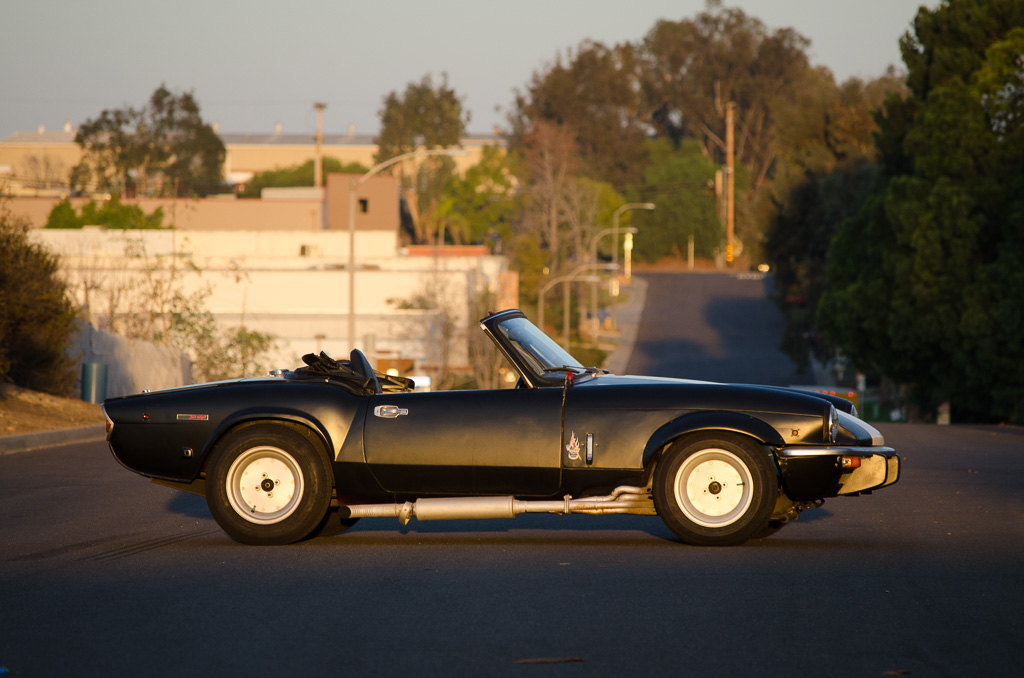 The 1974 Triumph Spitfire. It is British, it is small, and it is not very fast.

Why then, is it such a blast to drive?

This is David Beckett’s Spitfire. It’s powered by a 1500cc Pushrod 4 Cylinder engine. It has a 4 speed transmission, and the steering wheel is the size of a salad plate. But none of that makes it was it is. 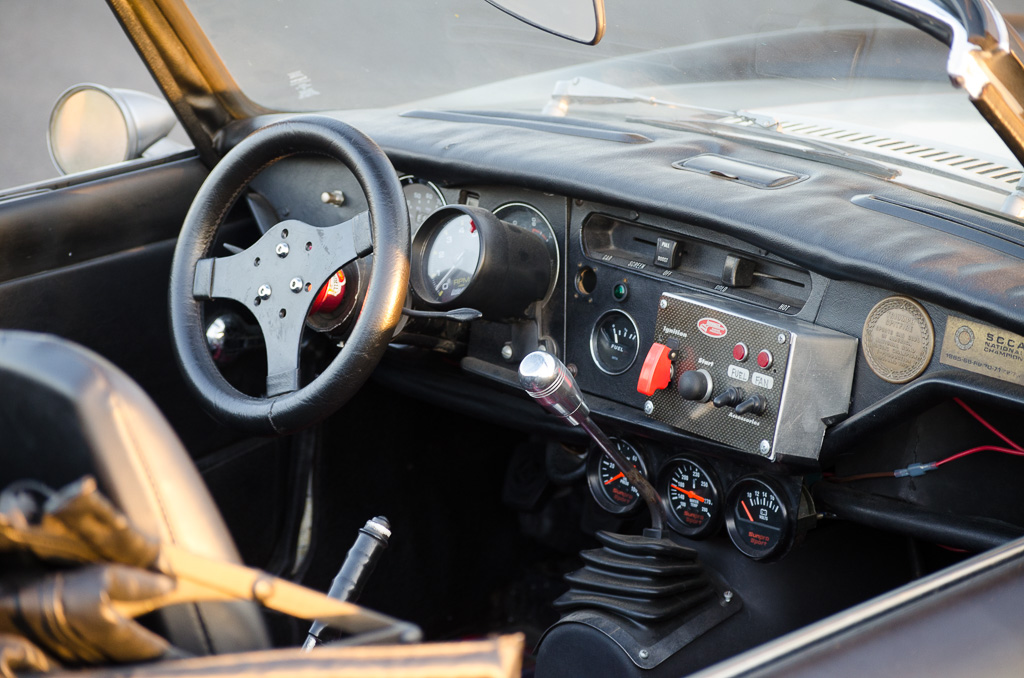 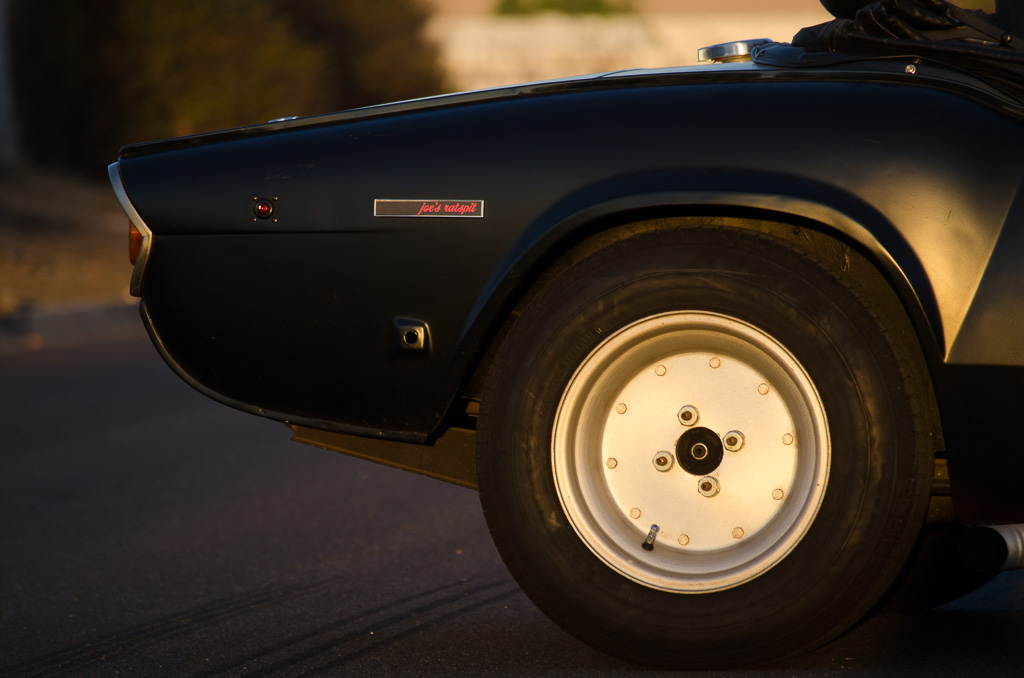 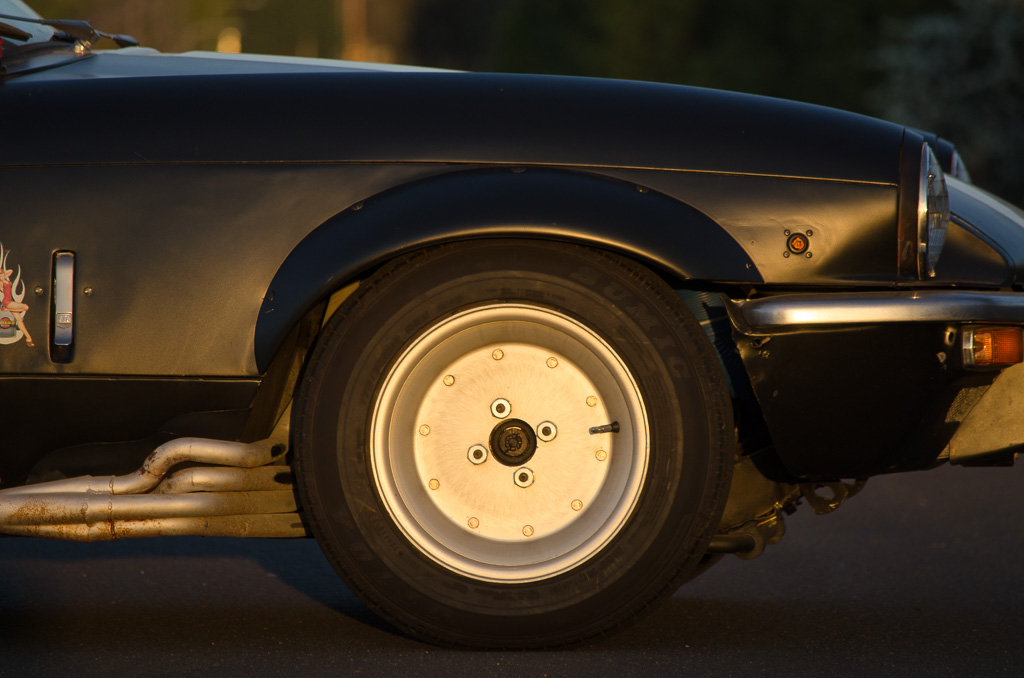 The first car Dave ever bought was a Spitfire. The year was 1990, Goodfellas was in theaters. He got it from “A lady in Kerny Mesa for two hundred and fifty bucks.”, But it needed some work. So he headed over to his Grandmother’s house where his Father, Joe, was restoring his own Spitfire. Joe’s Spitfire was left to him by his Father, David’s Grandfather, who bought it off the lot, brand new. Dave “borrowed” parts from this car to fix his own, and he was on the road in no time. 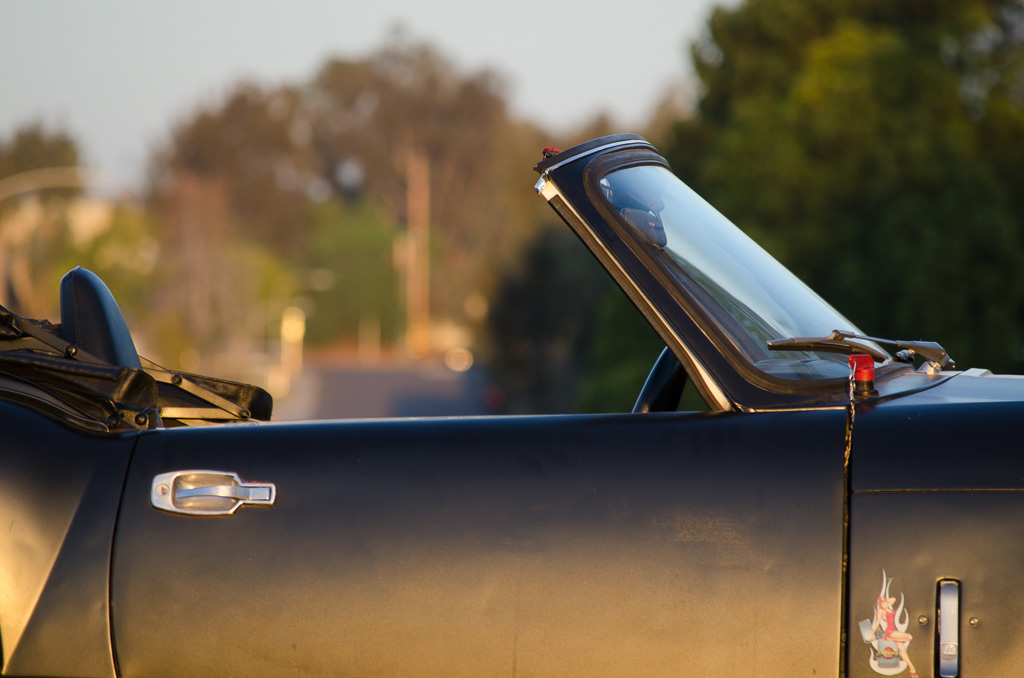 After that, he crashed his. Then he rebuilt it. Then he bought more Spitfires to use as parts cars and when he would thrash one, he would again, buy another Spitfire to replace it. At some point on this journey he ventured into X19 Fiats because building one of those into a race car sounded like a good idea I imagine. After 4 running and driving examples, a plethora of parts cars, a Fiat obsession that never panned out, and some added general-uncertainty-of-life, Dave sold everything small British roadster related, and walked away. 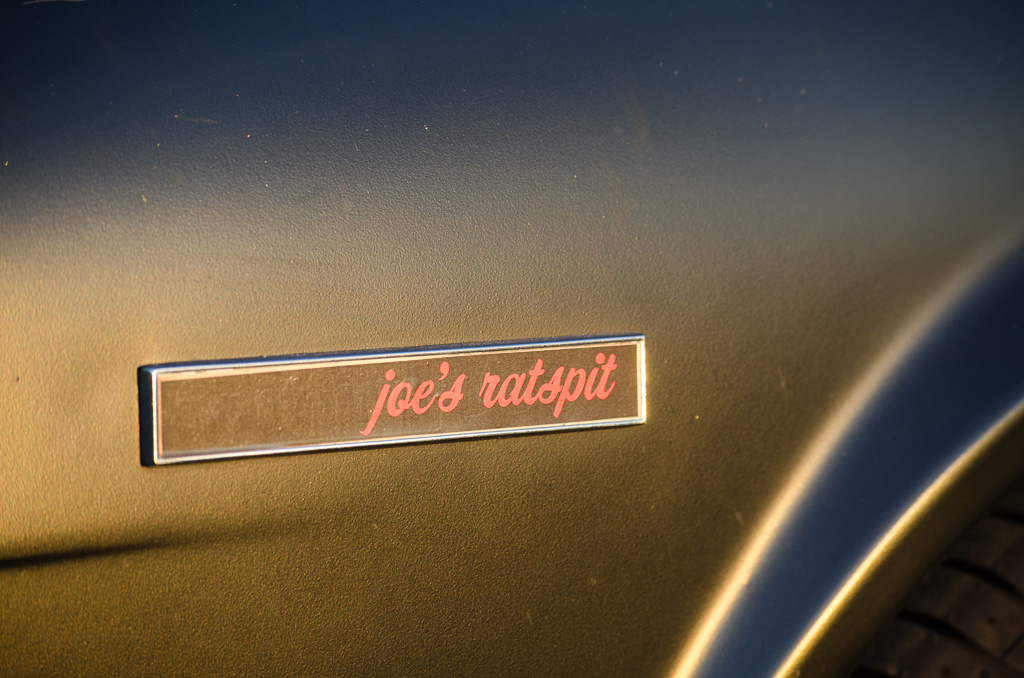 For all the spitting of fires going on in Dave’s life, his Father never sold, or crashed the one he had back at Grandmas house. 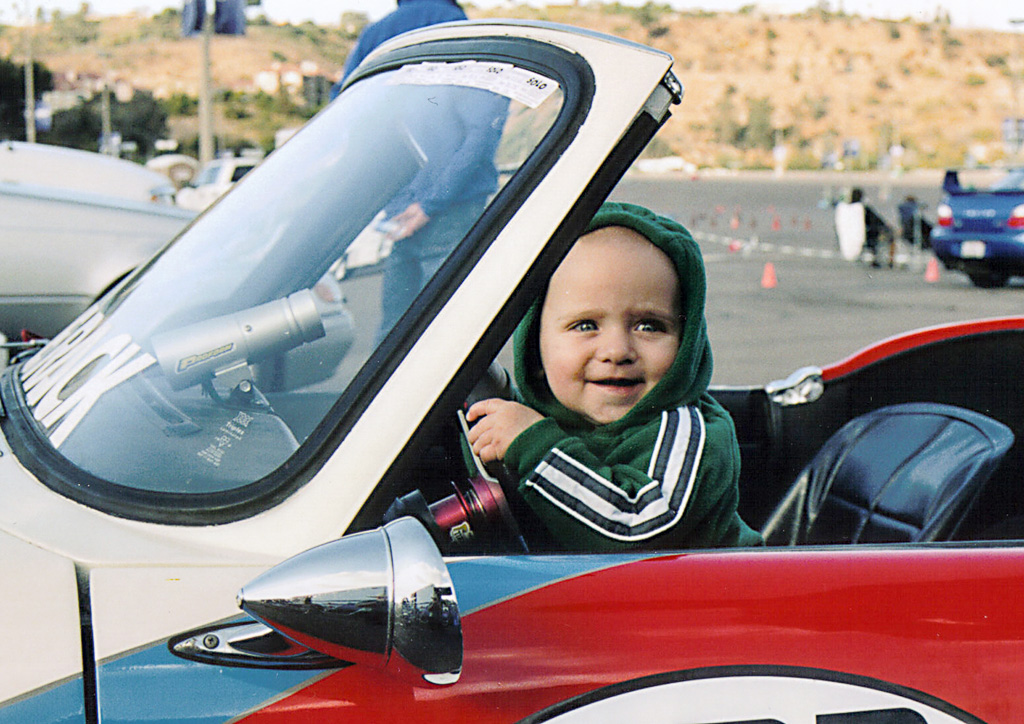 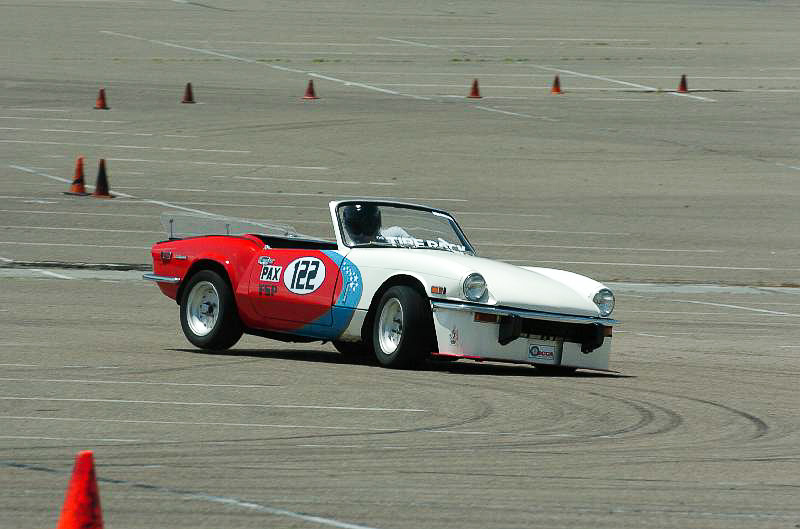 Dave and Joe raced it from 1996-2008. There’s a wall of trophies and plaques in Dave’s office that chronicle the saga. This was a time before they gave everyone who showed up a ribbon. Which makes it easy to see; the Becketts were fast.

In 2013 Dave’s Father passed away, and like his Father before him, he left his Spitfire to his son. 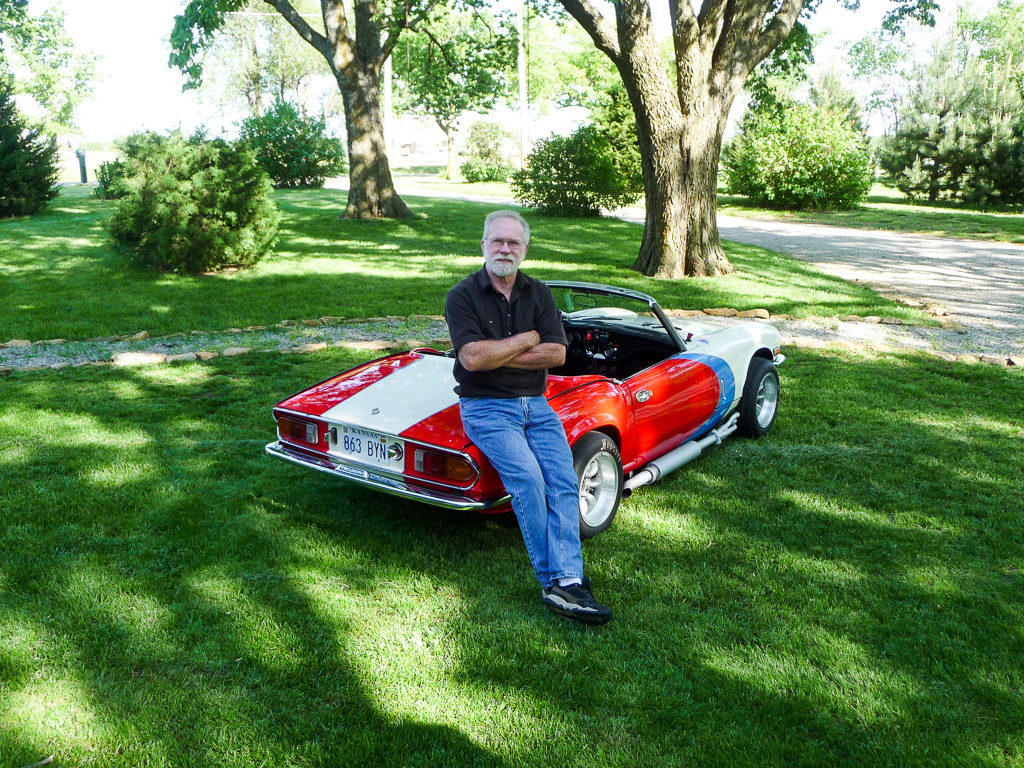 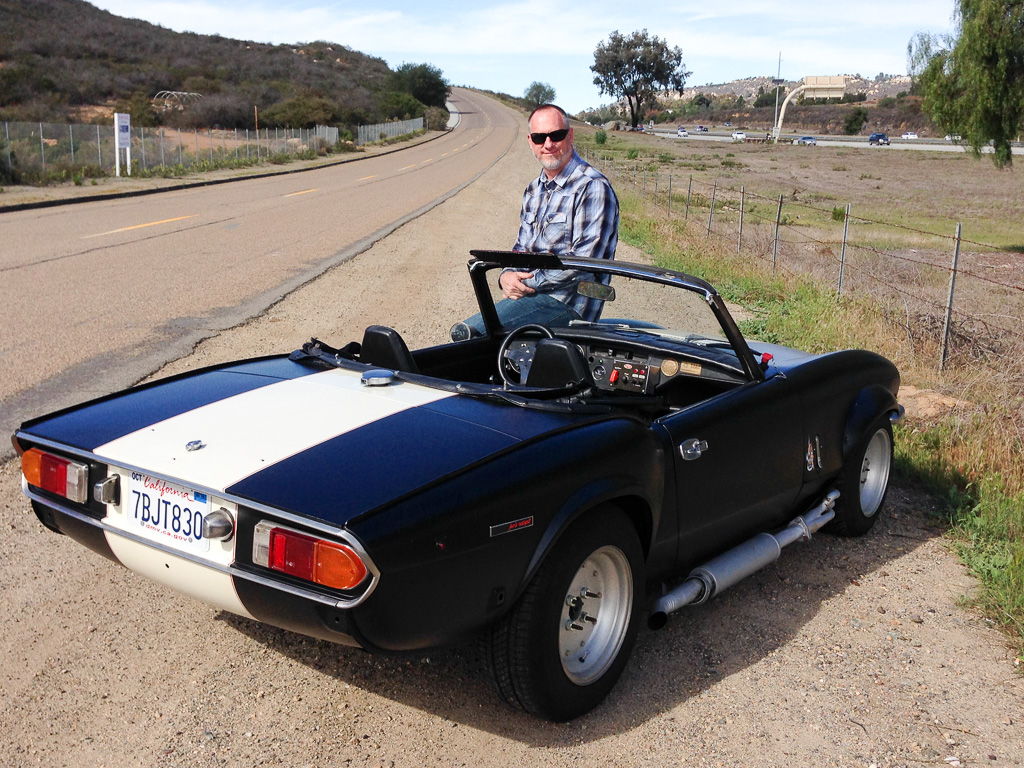 I’ve caught glimpses of this car, peaking into Dave’s home garage before taking off to go on desert trips. It has a habit of staring back at you, leaving you with a mysterious feeling. Old British Roadsters have always intrigued me, but having never been around one, it was hard to comprehend what they actually were, or rather, how they actually are. 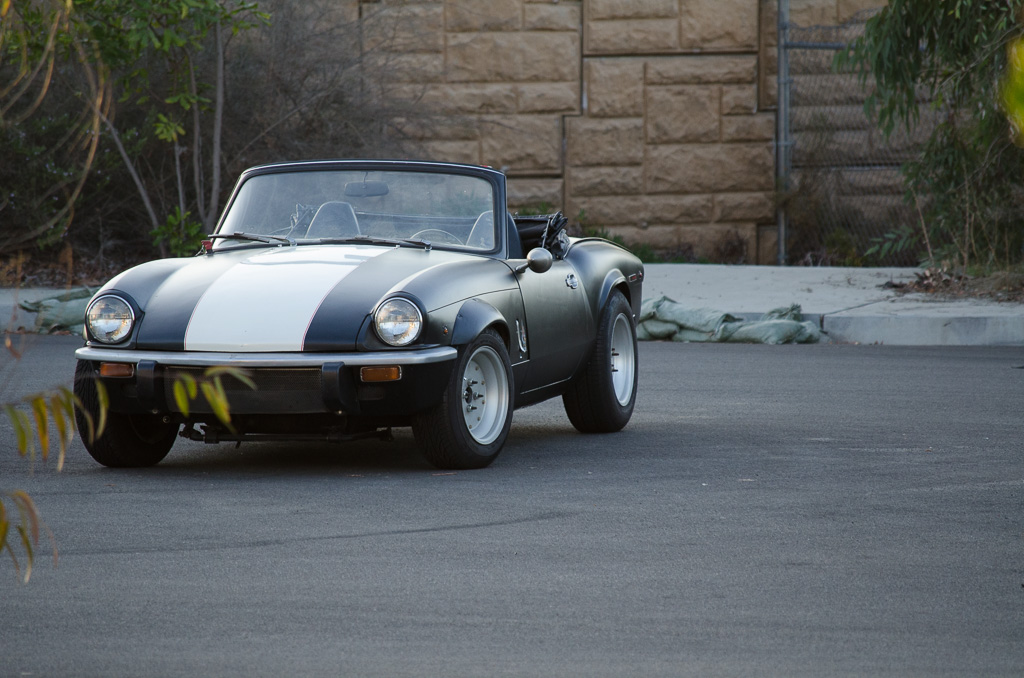 David brought it to the shop last week, as it’s been in need of some routine maintenance. I arrived that morning and saw it parked outside the shop. I asked him what it was there for, he told me, “I thought we could take some pictures.” He then told Jake, the shop foreman, and I, he had to go pick something up from another shop, and almost while walking out of the door Dave says, “Hey! If you can start it, you can drive it.”. The game was on.

Around an hour of looking under the dash, flipping random switches, and imagining David-esq contraptions that might deter the average car thief, Dave shows back up and sees me, stumped and confused, trying to start his race car. He laughs, goes inside, and grabs a red key that I could tell was the toggle to a killswitch. 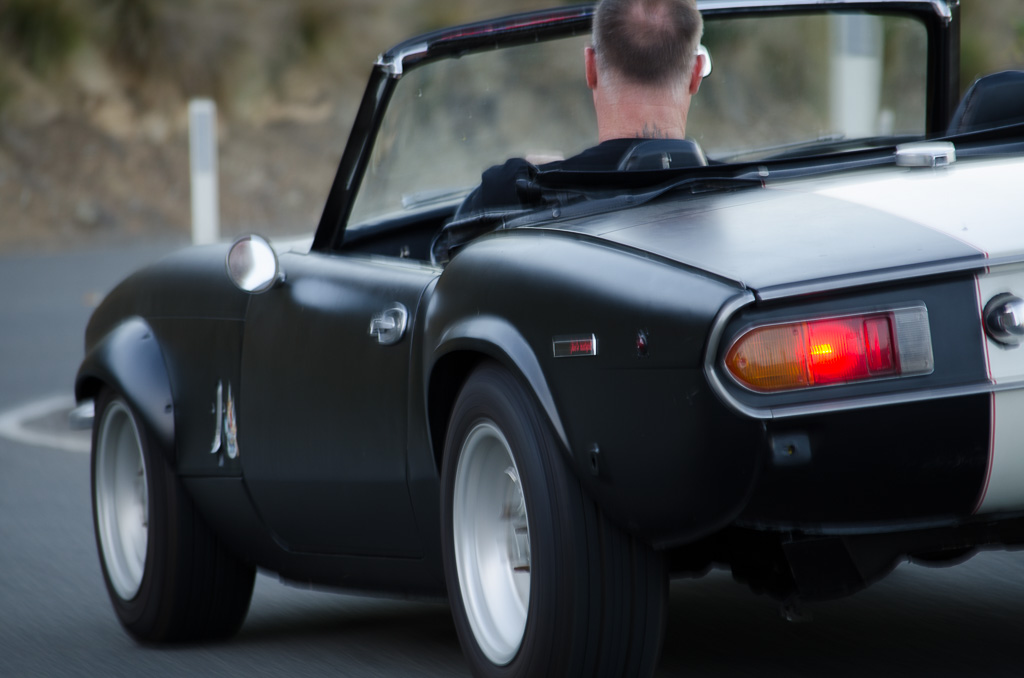 We go for a rip. There’s a couple of nice turns and a strait away around the business park where the shop is located and we can usually have a little fun before any issues with our neighbors arise. David takes a moment to show me what a Quaife LSD does, apparently it’s for shredding tire, and after some 4th gear pulls and a couple hard courners, we are back at the shop.

He gets out, leaves it on, and tells me “Make sure it’s in first and not reverse. Take it easy first couple times. Warm up to it… Also if anyone called the cops they’re gonna think you were the one doing all that other stuff.” He laughs and walks away. 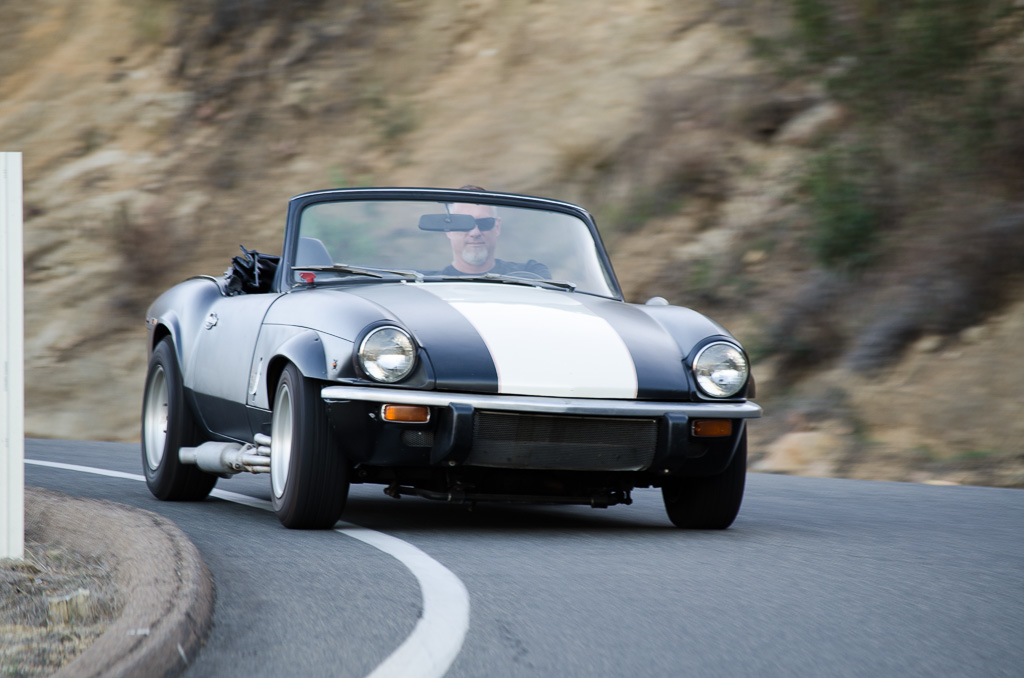 Whatever this car lacks in power it makes up for in inspiration. Getting on the throttle produces a carbureted rhasp that screams race car thoughts into your ears. Every corner tells you that you can push it more into the next. There’s nothing to distract you in the cockpit. It’s the epitome of driving a slow car fast. The Quaife in the rear lets you put down every bit of power you have and the suspension is stiff, transfering your inputs straight to the road. I’ve driven around in a built BMW E30, it felt like a go cart, I would describe that car as raw. Which in turn, means the Spitfire is fresh off the cow, still bleeding. The car itself weighs just under 1,800 pounds and its relative light weight, coupled with its small wheelbase, makes any modern car feel like a Suburban. 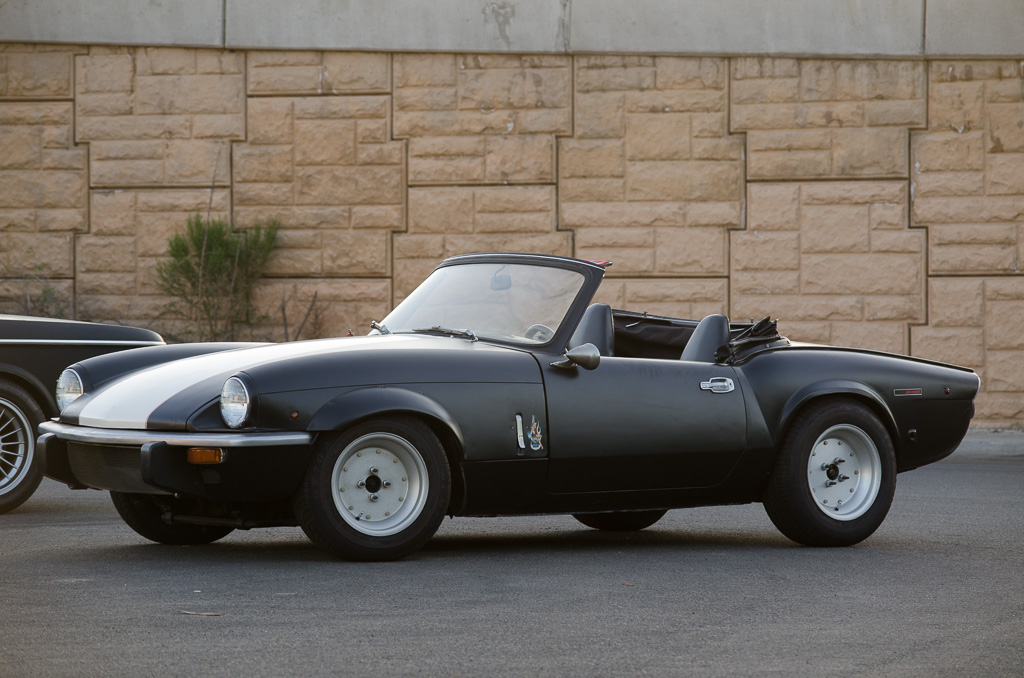 That’s why it’s so much fun. There’s nothing protecting you from yourself. Lift off in a corner, the back end steps out. Turn the wheel hard, the car turns hard. No ABS, Power Steering, or cushy seats. There’s not even a roof. Everything about it just wants to rip. It connects you to the road, gives you 4 tires, and puts power down. No nonsense, this is a drivers car.

I was informed later it’s even better with the high compression head Dave has, and it’s racing shoes, but I didn’t care. It’s character is one of a kind. It was made to drive, and it has been driven hard. Not until I drove it did I fully understand why the Becketts held on to it. Why they raced it for so long. Why three generations of men have kept this car in the family. 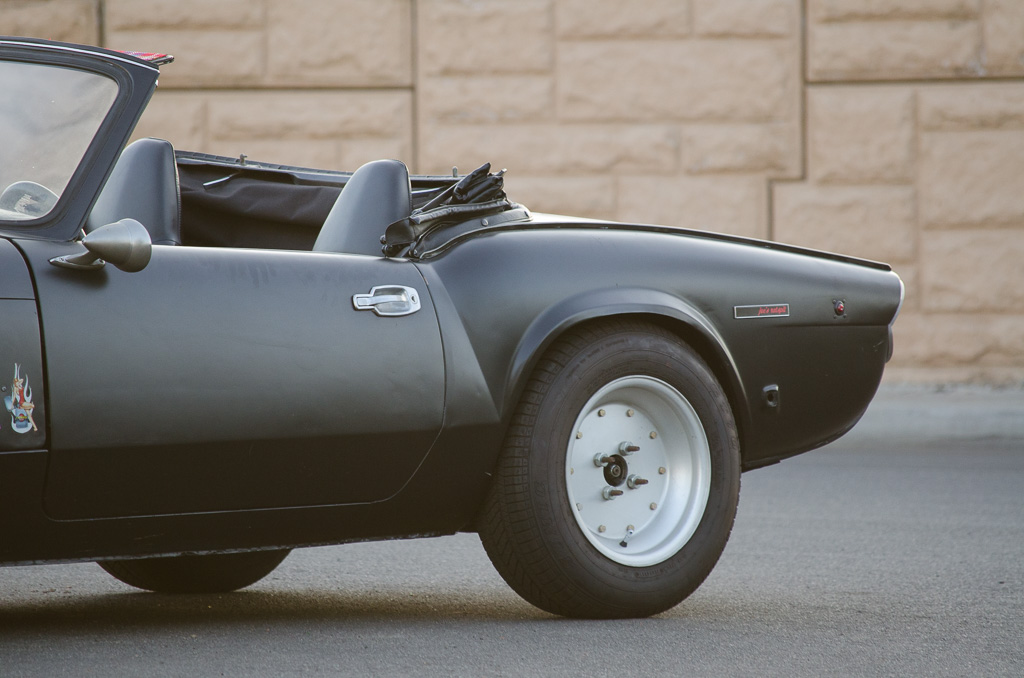 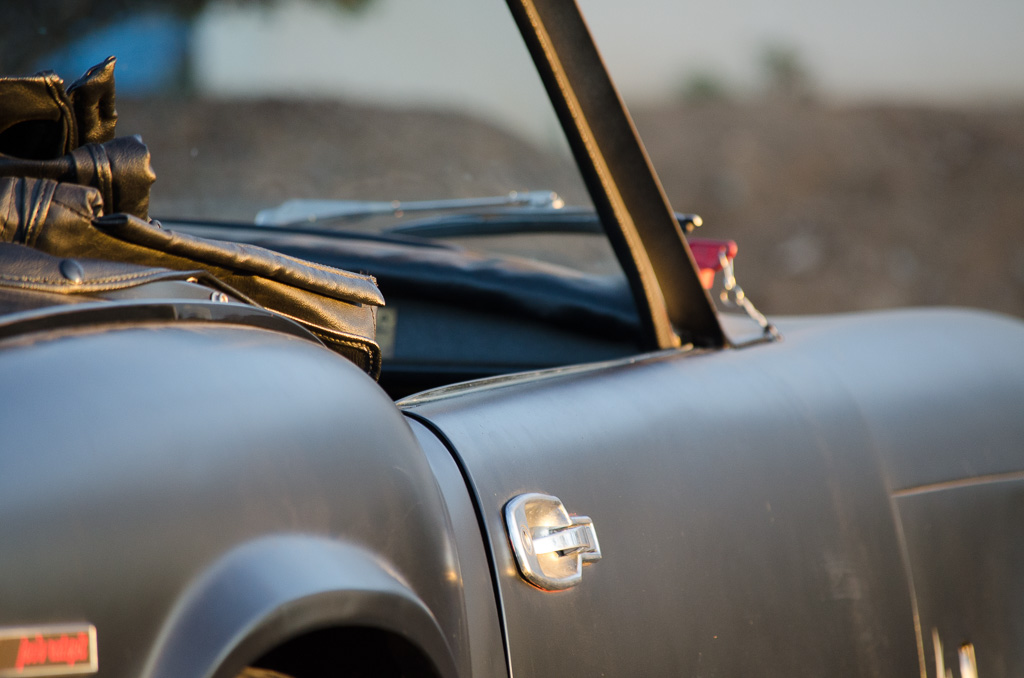 It can only be described as a feeling of responsibility. When you jump in Dave’s Spitfire, you feel responsible. Not the kind of responsible like when your Dad gave you his car for the weekend. You feel responsible to the guys who built it and drove it, to drive the absolute piss out of it, just like they did. Because that’s what they built it for, and anything less, would be disrespectful.

And you have to respect your elders. 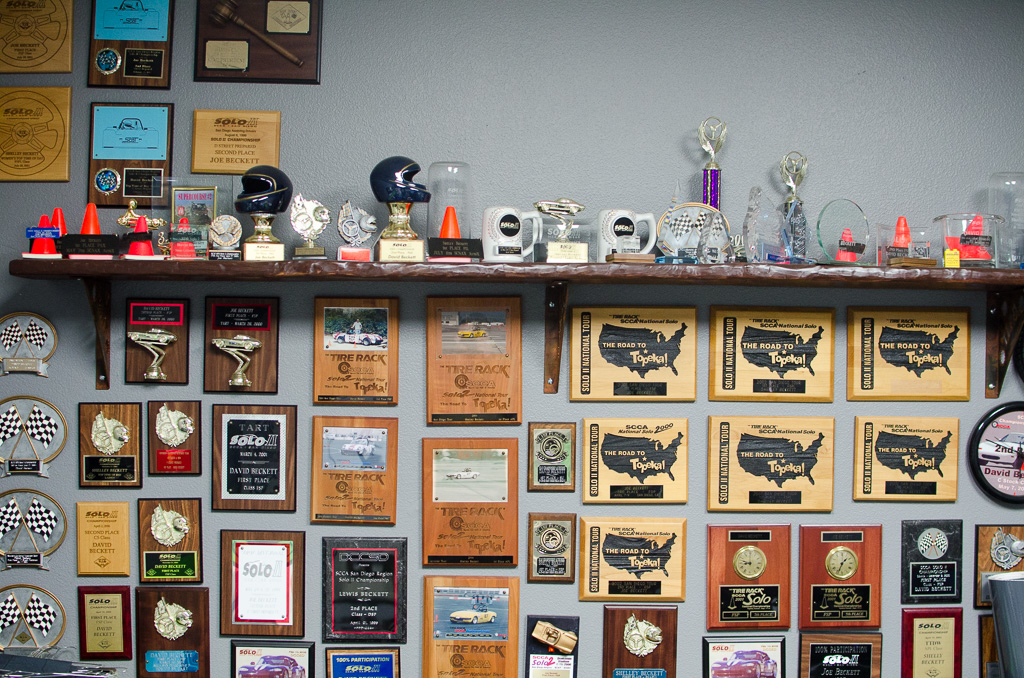 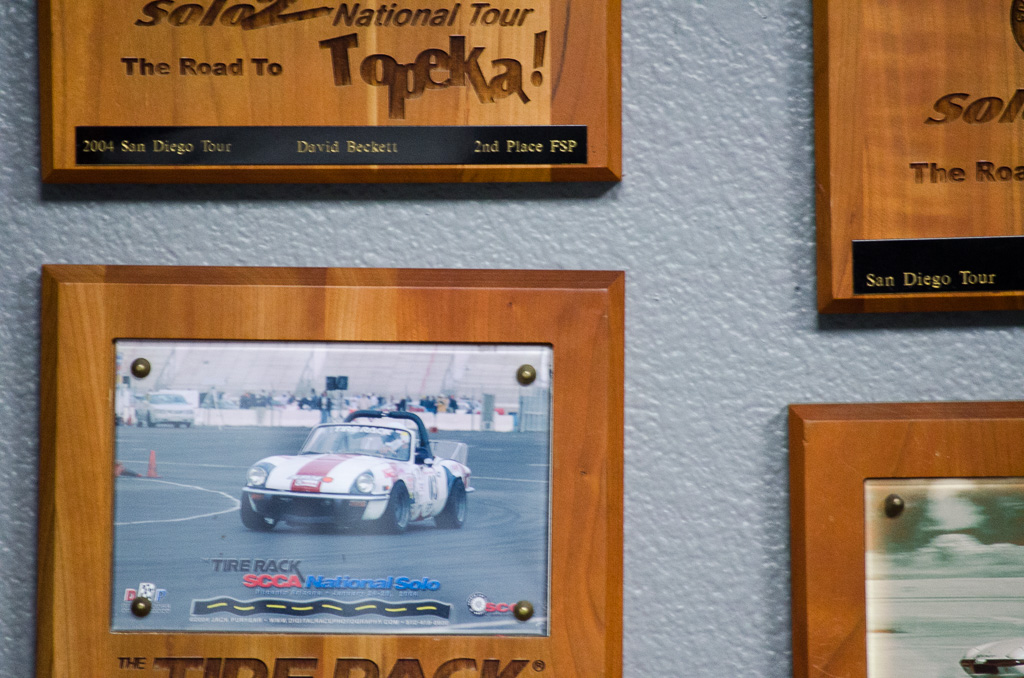 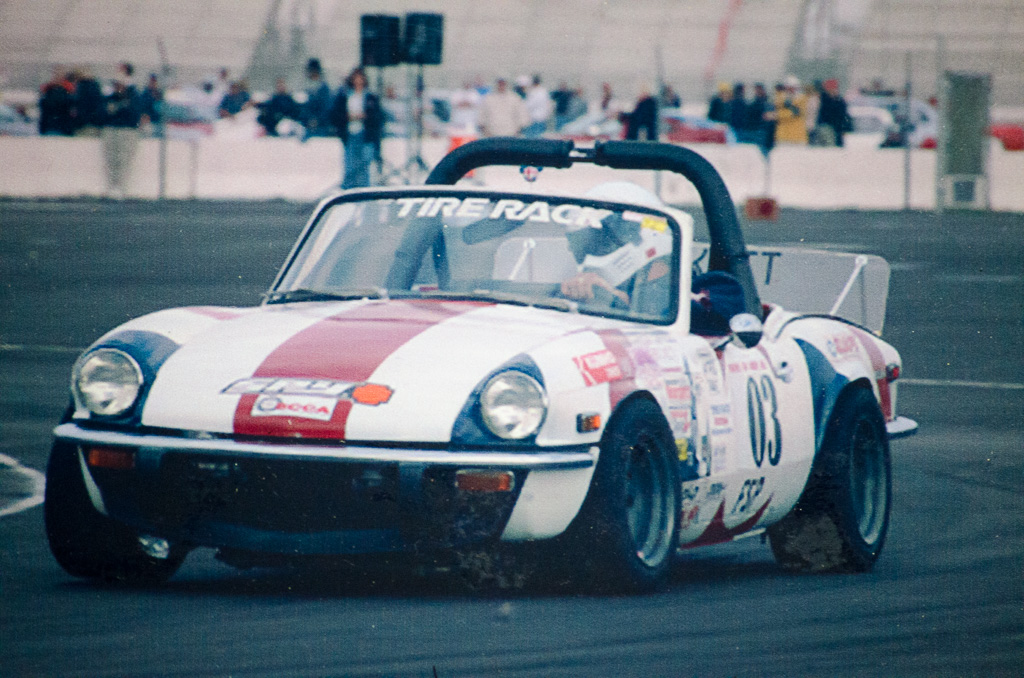